Dr. Steven Shu, medical director of One Stop Medical Center, lead a group of Chinese American doctors from the United States going to the Haiti in the mid of January, 2018 to provide free medical care for local residents. This is the sixth time that he has been active in international medical mission since 2015, and it is the fourth time that he goes to the Haiti. 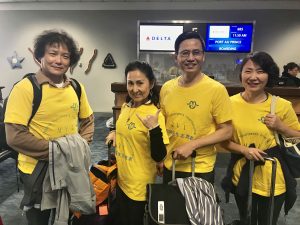 Dr. Shu and another surgeon Dr. Dean Currie performed about 40 office procedures. Three other team physicians (Keyi Yang, a neurologist from Seattle, Ming He from New Jersey, a neuro-ophthalmologist and Jerri Mao, an internist from San Jose) went to the mobile clinic with other medical mission group and provided general care to the hundreds people in the villages.

Over the past 14 years, Dr. Shu has been enjoying making his contributions to local communities. Since 2015, he has been focusing more on his international volunteer work in Haiti and Philippines. In 2017, he became a founding president of Medical Volunteers International (MVI), a new non-profit organization for the Chinese American physicians dedicating the medical missions in the poorest countries around world. The MVI collaborated with the faith-based non-profit organization Mission of Hope Haiti and carried out the first Haitian International Medical Program.

Dr. Shu’s medical mission dream is to establish the surgical center in Haiti.